Operation Shoebox  teamed up with famed watercolor artist James Fiorentino to offer the opportunity to own some great Artwork!

Auction Has Ended! Thank you to all who supported our event!

Now that the auction has ended, the winning bidder will receive an email informing them that they have won an auction item along with a link to pay and instructions for delivery.

A portion of the proceeds from this event being donated to Operation Shoebox of New Jersey.

Founded in February, 2005, Operation Shoebox NJ is an all-volunteer grass roots organization dedicated to collecting donated supplies and shipping care packages to U.S. troops based in Iraq, Afghanistan and other Middle East countries.

“James Fiorentino is not only a longtime supporter of Operation Shoebox New Jersey, he is a friend.He and I reconnected soon after Operation Shoebox New Jersey was launched in 2005; I had written a story about James for a local newspaper just as his career began to take off.We had reached out to him requesting he donate a giclee of one of his paintings; he didn’t hesitate, and offered to help out going forward.That was 15 years ago, and since then, James’ generosity and support of United States military has been unending. His works have been featured at our annual fund raising dinners, golf tournament and sports auctions helping us to raise more than $30,000 over the years.He generously painted an original of former New York Yankees Cy Young winner and Somerset Patriots manager Sparky Lyle and gifted Operation Shoebox New Jersey with the painting, which hangs proudly in our office. We have reproduced gicless of this print and sold them at fund raisers.Operation Shoebox New Jersey is a 501C3 non-profit volunteer organization whose sole mission is to pack and ship personal care packages to US troops deployed overseas. Our success over the past 16 years has been fueled by an overwhelming response from volunteers eager to support our mission.” ~ Rod Hirsch, Executive Director, Operation Shoebox New Jersey

Operation Shoebox New Jersey  has shipped more than 180,000 care packages to U.S. military personnel at 800 bases in 70 countries, including those serving in Iraq, Kuwait, Afghanistan and other posts in the Middle East. 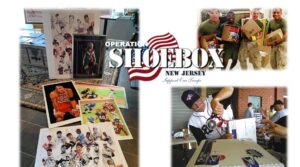